Bishoujo Shashinkan Special: The Double Vision (HARD, 1987) is an adult game developed for Microsoft MSX2 that featured a photographic simulation of aperture setting as core mechanic of the gameplay.

Bishoujo Shashinkan Special: The Double Vision is a combined release of Bishojo Shashinkan: Moving School and Bishojo Shashinkan: Studio Cut, neither of which were released separately for the MSX or X68000. Both games put you as a photographer trying to take photos of schoolgirls, where you must use your judgment to set exposure correctly. As the game(s) progresses, the option to use an automatic camera is removed, forcing you to correctly guess both aperture, shutter speed, film sensitivity and if flash should be used

With Magic Hour, get started with VR photography! Take beautiful pictures by exploring an island lit in the perfect light and experiment with an accurate virtual SLR camera that incorporates all the physics of a real camera, in VR.

Paparazzi for Playstation 2 (HuneX, 2005, original title: The Camera Kozou) is a photography simulation game where the player has to take pictures of models, with the possibility to request the model to look at the camera, to “adopt a charming pose”, “adopt a sexy pose” and “get a kiss on the fly”. The player/photographer can also dance, jump and wave hands to build empathy with the subject and it’s possible to move around the photo shoot location to take the best shots of the model’s performance. 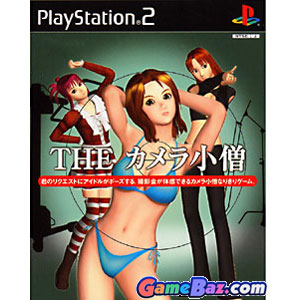 While the content of the game is questionable, with much of the game’s 3D physics simulation spent on rendering the bouncing of the models’ oversized breast, the camera simulation in manual mode contains many parameters rendered directly from analogue cameras (namely flash, zoom, focus, aperture and shutter speed).

The truck simulation game Euro Truck Simulator 2 (ETS2, SCS Software 2012) is interesting with regard to in-game photography because it does not force the user to push the screenshot button on the keyboard in order to take a picture instead it features an in-game photo mode. This feature was introduced in update 1.12 and works like a photo studio to go so that users can take crisp snapshots of their trucks wherever they are in the game world. In the best tradition of car photography they take location, lighting, setting, interior or exterior details, etc. into account for the right composition. Users can upload and share their photos on the game’s World of Trucks which partly functions like a flickr for ETS2 players. 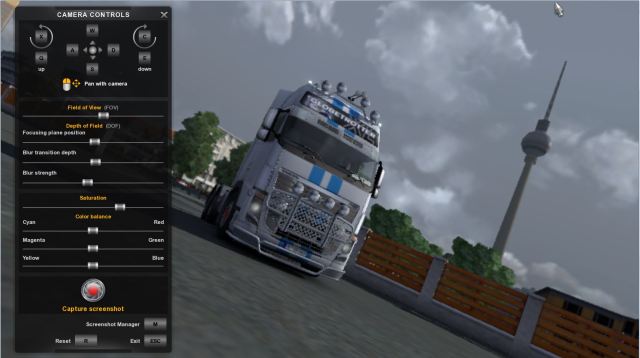 To get the right look the interface of the in-game photo mode allows to tilt, pan, and roll the camera. The player can move the point of view to get the right composition. Particularly interesting is that one can change the field of view (FOV), the depth of field (DOP), as well as the focus which adds essential photographic features to the screenshot.

Apart from this the mode also allows for some configurations which are normally part of the photographic post-processing. As such the user can choose to change the color balance of their image as well as the saturation.

And, yes, that’s my truck in the second photo!