WE BECOME WHAT WE BEHOLD (Nicky Case,  2016) is an online game on photographic media and how images affects our perceptions and shape our behaviours and society.

The only photographic function that can be controlled is framing (point & click), before taking a picture. A picture is then automatically “distributed” on the main square’s media channel with an added caption that “interprets” the action portrayed in the image.

In [GTA Online] he’s begun to play as a “war photographer,” using GTA Online‘s passive viewing mode to follow other players around and snap pictures. He even started his own crew called (appropriately enough) “Media Lens” in order to invite other like-minded GTA players to contribute their own “firsthand images of the war zone that is San Andreas.”

Edited to have a sepia-like filter and the boxy shape of a medium format camera, his images look like a cross between the work of the famously macabre portrait artist Diane Arbus and a seminal war photographer like Robert Capa.

Lost: Via Domus (Ubisoft, 2008) is a game spin off of the Lost TV series, where you play a photo journalist named Elliott Maslow who loses his memory in a plane crash.

The game employs the use of flashbacks as a storytelling device, much like the television show, and gamifies the act of photographic capture as a way to retrieve memories. Framing, focusing and zooming are realistically simulated in-game, while the function of the photographic act is given the supernatural power to “cure” the protagonist’s amnesia.

Down and Out in Los Santos is series of photographs that are created by exploiting a smartphone camera feature within the video game Grand Theft Auto V. Players of GTAV can put away the guns and knives, and instead take photos within the game environment. This operates in basically the same way as ‘real’ cameras do. I walk around a three-dimensional space, find a subject, point the camera, compose the shot, focus, and click the shutter. I have taken a photograph.

Adopting a photojournalistic approach, the series aims to engage in a sort of social-realism for the software-age, documenting poverty and the lives of the homeless within video game environment’s socio-economic hegemony. Through performative engagement with the uncanny simulations of society’s most vulnerable, Down and Out in Los Santos aims to unearth the viewer’s empathy and humanity through manipulative photographic tropes.

Embarking on daily photographic expeditions within this video game, I have already spent over a year capturing these homeless people, their surroundings, the infrastructure, and hopefully the symptoms and causes of their states of being. The initial result is thousands of quasi-photographic images, which depict moments of real intimacy between myself and these virtual people. There are a number of ways that this is achieved – such as waiting for eye-contact with the simulant, or using depth of field to draw focus to objects, poses, limbs and intimate moments between groups of people. These individuals do not provide the game with any functionality per se, as they never intersect with the narrative. Instead they exist as why I think of as an ‘ambient human presence’. I am not proud to say that they exist in a similar place of reality to the homeless people who sit on the doorsteps of my studio every day in Dublin’s city centre.

While the inhabitants of Los Santos possess only a superficial amount of artificial intelligence, it is possible to have real emotional experiences in their presence. This might sound sad and geeky, but it is true. The characters are aware of my presence as I photograph them, some ignore me, other times I am attacked and must defend myself. They chatter to each other, they share alcohol and cigarettes, they ask for money to buy drugs. Programmed to self-identify, they congregate with those in similar social situations to themselves.

Once I have taken the photographs, the images are then uploaded to a social network called the ‘Rockstar Social Club’. The feature called ‘Snapmatic’ is itself is a simulacra of modern photo-sharing apps, such as Instagram. A technical imposition of corporate pragmatism means the images are downsized and compressed, and their journey through these networks is scarred onto the pixelated, low-resolution corrupted surface of these digital photos.

This website is where the project will be initially rolled out, with software automatically posting images every day until some point in 2018. I have already posted hundreds of these images online on various networks. On Instagram, the project takes an interesting turn. Through the use of hashtags, I have been attempting to allow these images penetrate traditional photographic and photojournalism networks. The unexpected result here is that dozens of bots have been ‘liking’ these images. The bots in question have been installed by particular Instagram users to automatically ‘like’ every single post on particular hashtags. I have been calling these the “Sycophant Bots”, since the exist only to flatter users, with the hope that people like me will ‘follow’ their host-account. Perhaps it is poetic, but entirely appropriate that software is the first audience of these empathetic photographs of software people.

“Interview: Alan Butler And The Aesthetics Of The Video Game Re-Enactment” on gamescenes: http://www.gamescenes.org/2017/05/interview-alan-butler-.html

A documentary game titled Eyewitness appears to let you play as a photographer in the setting of the Nanjing massacre period during the Japanese invasion of the city. Unfortunately apart from very few information online, the game does not seem to be available anymore.

Harris Wai, from Hong Kong Polytechnic University’s Multimedia Innovation Centre, has developed this game about Japanese war crimes (thanks Espen). You play the role of a photographer who needs to document the Nanjing Massacre.
source: http://www.ludology.org/2003/03/eyewitness-game.html

Links to the game appear to be not working, but according to this site http://highla.altervista.org/storia.htm (Italian only) the game was presented in 2003 to the Games Developers Conference in San José.

A selection of videogames that attempt to incorporate photography (or better “photographing”) as game mechanics to a certain degree.

In this PC game from 1992 (ported to PS2 in 2002, and with a a sequel titled Gekisha Boy 2 released for PS2 in 2001), photography plays a big role in both story and game mechanics. This makingGekisha Boy one of the earliest examples of videogames to incorporate a camera and the act of taking pictures as core game mechanic. In each level the main character has to take snapshots of events happening around him, with points being assigned according to the player’s ability to catch the “decisive moment”.

In this series, the game takes inspiration from the Victorian born art of ‘Spirit Photography’. It lets the player capture images of spirits through a Camera Obscura, while exploring abandoned ruins and fend off hostile ghosts.

the main character of Dead Rising is a photo journalist, Frank West, who has to survive a zombie-infested environment while documenting the events with his camera. Shots taken with the in-game camera are evaluated (genre of the photos is analysed, e.g. brutality, drama, …) and rewarded through a point system.

Spiderman 3 lets you play as Peter Parker, and in some missions you are required to get pictures for the Daily Bugle. A basic camera interface allows you to zoom and frame an image before taking the shot. Pictures are given points (photo score). 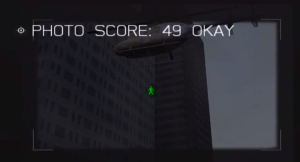 
in GTA V, there are a number of missions where you work with/for a paparazzi photographer and you have to take pictures with a DSLR or with your in-game smartphone camera.


Camera Sim 3D is a DSLR simulator, developed with the purpose of teaching the basics of photography and how to operate a DSLR camera. It is still in production at the time of writing, but a live demo is available online.

an early camera simulator demo from 2011 (this one uses video footage instead of in-game textures): http://camerasim.com/apps/camera-simulator/

the original article included “Life Is Strange” as one of the games about photography, but it was not featured in our list because the mechanics for taking a picture in the game offer very little control or similarity with the act of photographing (no possibility of framing, zooming, focusing).