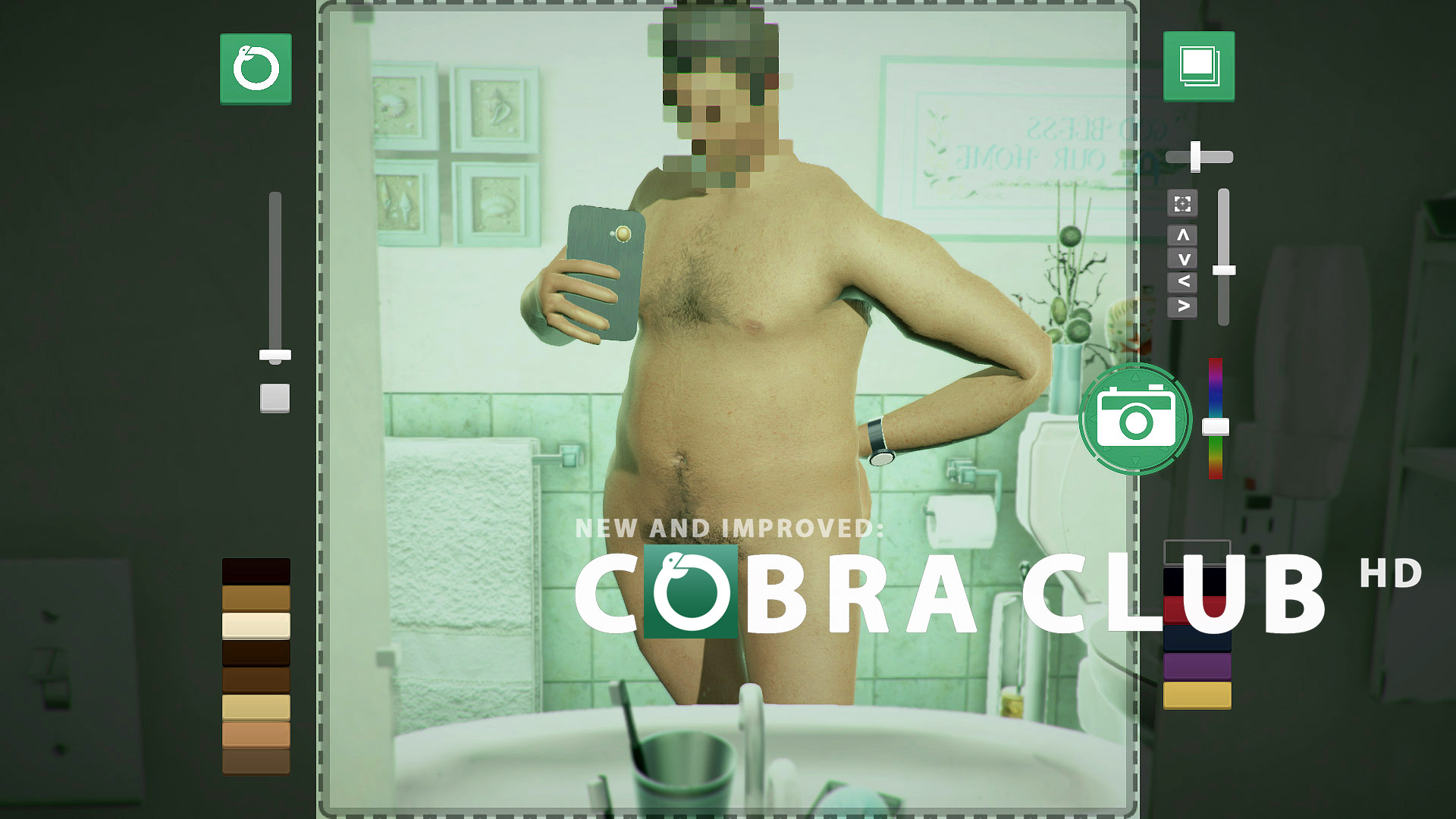 Pictura is a photography game where you use you phone as a window into different worlds. Take pictures to trigger events, find creatures, and progress through different settings.

Pictura is an exploration game where your phone acts as a window to a virtual world, supporting both touch and accelerometer controls

Using a virtual camera as a main gameplay mechanic, Pictura has you taking pictures which you can then sell to upgrade your camera, adopt new pets and travel to new locations. Each world is littered with hidden events, triggers, puzzles, simple story elements and easter eggs for you to find.

Pictura has a general calm vibe combined with a few adventurous moments. The visual style is driven by photography elements, meaning it is rich in post-effects. Different lenses, filters and camera can help personalize the look and feel of each pic.

Each world has its unique setting, challenges and moments of awe. Following a semi-episodic format, a new world will present its own set of challenges, puzzles, surprises, visual style and minimalist story line.

With Magic Hour, get started with VR photography! Take beautiful pictures by exploring an island lit in the perfect light and experiment with an accurate virtual SLR camera that incorporates all the physics of a real camera, in VR.

What Remains of Edith Finch (Giant Sparrow, 2017) has a part of the games that uses photography mechanics as part of the gameplay. Focusing and taking a picture at the correct subject triggers the story to move forward.

Note: video below is a walkthrough and contains spoilers of the game.

Barbie Fashionistas Photo Shoot is an online game by Mattel, where players can set up a stage, design it with props and wallpapers, and have a virtual barbie doll pose and take snapshots. Saved photos can be printed.

Apart from simulating elements of fashion studio photography (set up lights, put up a fitting background, have a model pose for the camera…), Barbie Fashionistas Photo Shoot seems to be almost a simulation of a simulation (a digital simulation of a doll, which in turn attempts to mimic the real thing). This ambiguity seems to be hinted in the title screen “pretend you’re a photographer”, where the player is reminded we are playing pretend (This however leaves us confused when at the end screen the game states “Wow you’re a fab fashion photographer!”, as if the process of pretending turned us into actual fashion photographers). 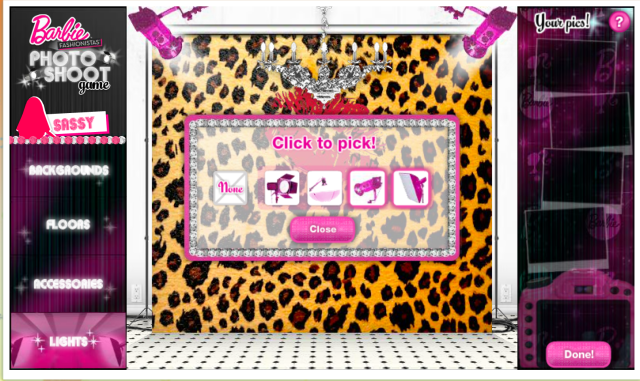 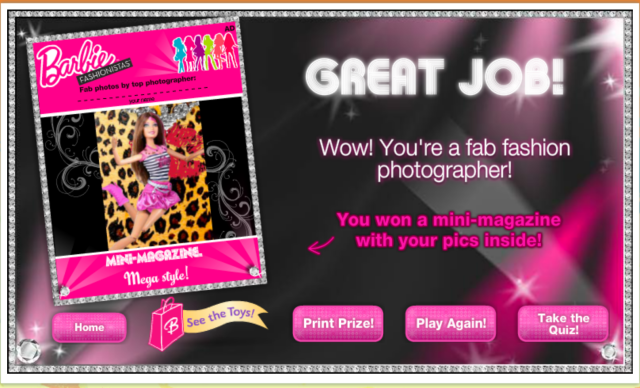 Paparazzi for Playstation 2 (HuneX, 2005, original title: The Camera Kozou) is a photography simulation game where the player has to take pictures of models, with the possibility to request the model to look at the camera, to “adopt a charming pose”, “adopt a sexy pose” and “get a kiss on the fly”. The player/photographer can also dance, jump and wave hands to build empathy with the subject and it’s possible to move around the photo shoot location to take the best shots of the model’s performance. 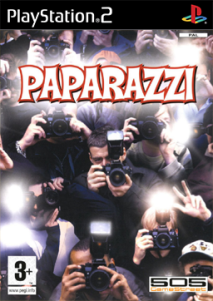 While the content of the game is questionable, with much of the game’s 3D physics simulation spent on rendering the bouncing of the models’ oversized breast, the camera simulation in manual mode contains many parameters rendered directly from analogue cameras (namely flash, zoom, focus, aperture and shutter speed).

“Press A to Shoot, Pokémon Snap – Shots and gamespace ownership” by Alexandra Orlando and Betsy Brey is an essay that focuses on the game mechanics of Pokémon Snap and the politics of in-game photography.

They draw a parallel between photographs and games as being both models, or “photographic referents” in Barthes’ terms:

games are models of experiences—not just depictions or descriptions (Bogost 4). The same can be said of photographs, which are also not representations of themselves, but instead, models of what they reveal.

The authors also trace a similarity between Susan Sontag’s “view of reality as an exotic prize to be tracked down and captured” by the photographer and the in-game world as a constantly reshaped environment, manipulated by the player. [personal note: to an extent this idea of Sontag’s photographer-hunter reveals (on top from the obvious political implications that made her work “On Photography” one of the most influential writings in photography theory) a gameplay element within photography, before there was even the possiblity to “gamify” its mechanics digitally.]

One interesting analysis of Pokémon Snap’s gamification of photography is the points-based system the game uses to distinguished a good photo from a bad one:

Each photo is judged on a few main qualities: size of subject, pose of subject, and technique of the shot. Additional bonuses are added to the score if there are multiple subjects in the photo, or if the player has performed certain events on a course that lead to special or unique poses (for example, getting a Pokémon to stand on a surfboard or sing in a group). The game privileges shots in which the subject’s size takes up about a third of the frame, the subject is in the centre of the frame, and is facing the camera. Some poses are encouraged over others, such as dancing with or attacking other Pokémon, but for the most part, all that is emphasized is that the Pokémon should not be facing away from the camera.

This leads to what Orlando and Brey call a “photographic colonialism”:

The fact that Snap gamifies basic photography skills and teaches its players how to create a single kind of photographic image indicates a single acceptable or desirable kind of photography. Not only does it teach just one style, but it also discourages learning others in the game space. This can be viewed as a kind of photographic colonialism—the limitation to a single viewpoint at the expense and extinction of others by a controlling power outside of the immediate environment. Snap disallows a variety of voices within its gameplay and photographic requirements, separating itself from photographic arts[…]